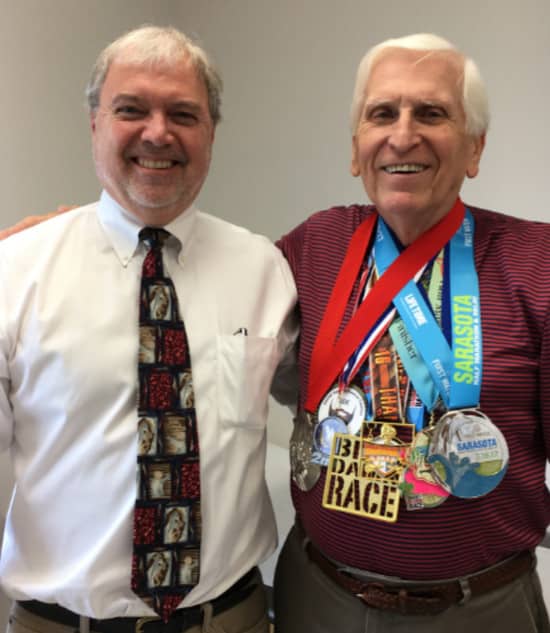 I should have written this article some time ago so others could know my experience with hip resurfacing.  Dr. Peter Brooks of the Cleveland Clinic performed the surgery to resurface my left hip on January 18, 2012 and I just recently had my five year checkup.  He used a S&N BHR.  At that time, I was 74 years old and had been running long distance since about age 55.  Between 1994 and 2008, I had run seven marathons, including Boston’s 100th running in 1996.  My last marathon was run in Kosice, Slovakia where I served as the U.S. Ambassador.

From 2009 to 2011, I developed pain in my left hip and was advised by orthopedic surgeons that I needed a total hip replacement but wouldn’t be able to run after that.  Not accepting that conclusion, I pursued extensive physical therapy and a couple of injections to improve my situation but to no avail.  During this time period, I became aware of hip resurfacing which allows running but the possible downside presented to me was metal ion poisoning.  Surfacehippy.info was my introduction to the technique.  I learned a lot and even watched some of the videos.  My final decision was to take the metal ion risk so I could continue my long distance running.

I researched the surgeons in the field and sent them letters to see if they would do the surgery.  I was surprised to receive a personal phone call from Dr. Brooks where we discussed everything and he said he’d be happy to do the surgery for me.  Because of his experience and the Cleveland Clinic’s responsiveness, I selected them.

I had an excellent surgery in January 2012 and, after a few days in the hospital and the area, my wife drove me from Cleveland back to our home in Virginia.  It wasn’t the most comfortable ride but with stopping every 2 hours or so, we finally arrived ok.  Recovery went very well but I took it very progressively and conservatively.  I resumed running and by February 2014 ran the Naples, Florida Half Marathon where I won my age group.  Since resurfacing, I’ve run ten races.  I wasn’t able to run more following hip resurfacing since I also had to deal with bouts of Atrial Fibrillation and other health issues.  I’ve been AFIB free for the last three years thanks to Dr. Walid Saliba of the Cleveland Clinic.  In March of this year, I ran the Sarasota Half Marathon finishing second in my age group.

During the entire five year period after my hip resurfacing, I have never had a problem with it.  It sits in there as if it were a native hip.  I recently had a blood test for metal ions and the results were normal.  Currently, at age 79 and soon to be 80, I plan to continue my long distance running for at least three more marathons and am thankful the hip resurfacing technology was there for me as well as an outstanding surgeon, Dr. Peter Brooks.

I just had my five year checkup in Cleveland with Dr. Brooks.  Prior to coming up, I emailed him that I had won second place in the Sarasota Half Marathon and he responded by saying “Bring up your medals”.  So, I decided to bring up ALL medals from the ten races I’ve run since the 2012 resurfacing.  I wore them as he walked into the room and got quite a reaction of delight!!  Below you’ll see doctor, patient and a lot of medals.

I strongly recommend that if you want to remain active and need hip surgery you definitely should consider hip resurfacing. It gives you back your active life.